This project helped the International Association of Prosecutors create and use the Global Prosecutors E-Network to provide virtual and online training to prosecutors and officials in 158 countries between 2013 and 2019 to better prosecute cyber crime.

The aim of the project was to improve prosecutorial capacity around the world by helping the International Association of Prosecutors (IAP) strengthen and deliver its online and virtual training to prosecutors.

The Global Prosecutors E-Network (GPEN) was established in 2008 under the auspices of the International Association of Prosecutors. The unique GPEN community enables cybercrime education and cross-border collaboration among prosecutors around the world.

This project helped the IAP create and use the GPEN to provide virtual training to 158 countries to better prosecute cyber crime. This network enables prosecutors to share best practice in investigating and prosecuting cybercrime by hosting and participating in monthly webinars. Working with the Council of Europe and regional international organisations (e.g. ECOWAS), IAP also arranges regional conferences with the aim of establishing region-specific networks.

There were many examples of the impact of GPEN activities including evidence that participants were better able to prosecute cases in court, influence the collection and use of e- evidence, better international cooperation and confidence requesting e-evidence across borders, the dissemination of GPEN gained knowledge in the development and training of colleagues across the law enforcement community, impact on the development of departmental and national policies and individual professional development.

A new GPEN website with online training. Included in the new GPEN website launched in January 2014 was a mobile friendly design, a substantially improved library of resources and a new social media campaign to strengthen and expand the community of Global e-crime prosecutors to better meet the increasing challenges posed by e-crime around the world.

The IAP conducted GPEN impact assessments in 2018 and 2019. The feedback from surveys was overwhelmingly positive about the value of GPEN activities. 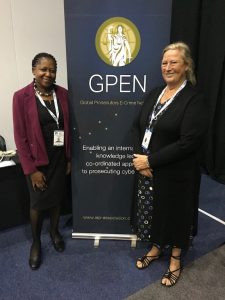 Image from a GPEN Meeting